PlantManager Release 6.2 is live now. Following are the items which we made live yesterday. Please click here for You Tube Demos 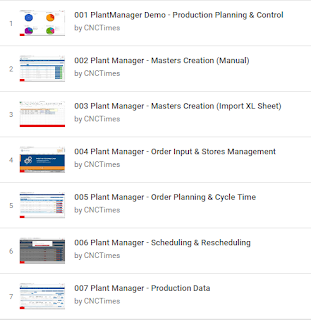 In order to get you a head start, all the Plant Manager videos are available at - You Tube.

The Demo video is a good starting point for anyone who wants to know the Plant Manager software.

After that once you sign up, Masters creation is the first thing everyone will need to do. Please take a look at those in details.

Once masters are created, users are ready to add orders, plan and reschedule etc.

Let's streamline the process at your shop floor, lets make optimal use of your machines and grow the business!
Posted by Plant Manager at 04:14 No comments:

Plant Manager - An unbeatable solution for your production, planning and control requirements

Production is at the heart of any manufacturing company, and it drives most other functions, including planning and control. Production, planning and control involves scheduling of work, assigning the work to machines and people, and designing how the actual work will flow through the entire system. In todays’ business environment, small and medium enterprises in the manufacturing industry are faced with challenges, especially in the pre- production phase, which includes inadequate capacity planning and uncontrolled delays during the engineering phase. Also, most SME’s do not have the resources to capture, control and tweak their production cycles for maximum utilization of resources.

The most commonly used methods of maintaining planning and production data by SME’s, comprises of capturing the data manually, or entering it in a software. The software though quite advanced, are not specifically designed for PPC. Some of them like ERP/SAP, are not only expensive, they are focused on other business areas rather than planning and micro scheduling.

Keeping these things in mind, CNCTimes.com designed and developed Plant Manager software. Plant Manager was developed keeping in mind the “Theory of Constraints” and is a powerful tool that has rich features. It provides the small and medium enterprises with the necessary tools to capture essential shop floor data, and help them make informed decisions based on the reports.

The work on Plant Manager started in the year 2014. The in-house subject matter experts at CNCTimes.com put their heads together with the development team, to conceptualize and develop the software. The beta testing of the software was done at customer location, which was very successful. Plant Manager was launched in April 2016, in Pune, India and has already received rave reviews for its ingenuity, ease of use and affordability. Today, more than 40 customers are successfully using the software at their factory locations.

Plant Manager Android app was launched in October 2016. The app is an anytime, anywhere “eye” for the shop floor, where one can get production reports on any android device. Companies can also use an internet activated device, which when attached with a VGA cable to TV screens, can broadcast the real-time production status on big screen TV’s, across the shop floor.

CNCTimes.com plans to triple the number of Plant Manager customers in the coming financial year. The company is focused on adding new features to Plant Manager, which will make it easy to integrate it with SAP, so that it can be used by a multitude of companies that are already using SAP. Today, Industrie 4.0 and IOT are a reality however, SME’s are still struggling with digitization. The company’s vision is to change the way planning, production and control is done in most companies.

CNCTimes.com wants to empower SME’s with a tool that will help them in taking a bold step towards digitization, and in channelizing their resources effectively.